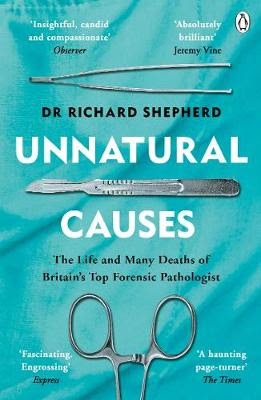 A while ago I was researching about morgues in India for one of my manuscripts. My notes are depressing to say the least—no dignity even in death. So, when I spotted ‘Unnatural Causes’ – a career-biography of Dr Richard Shepherd, one of the leading forensic pathologists, I grabbed the book. Forensic pathologists are specialists in conducting autopsies, a career one rarely gets an insight into. Dr Shepherd has done over 23000 post-postmortems in his long career spanning more than three decades.

I opened the book with some trepidation, I’ll admit. A subject such as this can be a slippery slope—it’s easy, perhaps tempting even, to give in to grisly sensationalism. But right from the first chapter, the prose is soft, dignified, and the reader is gently led into this behind-the-scenes world. One of the reviewers has described this book as “Heart-wrenchingly honest” – and they’ve not exaggerated. Dr Shepherd is unflinching when he describes his personal conflicts and vulnerabilities, and these honest reflections on his childhood, on his marriage, on his personality where he comes across as stolid (it works well for his profession, not so much as a family man) emotionally bonds the reader with him. As a result the book does not have a condescending tone given the insights it packs—instead, it is like having a heart-to-heart conversation with a friend, who just happens to be at the top of their profession.

There is a danger of going all text-book on the reader when describing the cases, but Dr Shepherd has balanced this well by setting the emotional contexts touchingly; each case is described respectfully with a good a dose of ‘technical’ details. I was particularly moved as Dr Shepherd recounts his early days where the of grief those bereaved affected him profoundly. He decides that he decided to “avoid the bereaved at all costs and stick to the safe world inhabited by the dead, with its facts, its measurements, its certainties. In their universe, there was a complete absence of emotion. Not to mention its ugly sister, pain”. As we get more acquainted with Dr Shepherd’s childhood, we being to appreciate why he felt more at home in the company of the dead, where there was no expectation of him to be visibly emotionally available.

Given the situation we are in today, with countries setting up temporary morgues, I was particularly affected by Dr Shepherd’s description of mass disasters—terrorist attacks and accidents—especially when bodies are dismembered. Dr Shepherd takes us through a number of such sites, the 9/11 attacks, the Bali bombings, boat and train accidents in London. Although he describes the scenes factually and dutifully, you realise the enormity of the work, and the thanklessness of it; the oppressive grief of the entire operation—the meticulous job of labelling every body part, be it a finger or a limb, or just a head; mind-numbing identification process; making bodies whole where possible.

Perhaps what makes this book come alive is Dr Shepherd’s description of the everyday-ness of his job—after a day at the morgue, coming back to a busy household where his wife was studying hard for her med school, so the evenings would go in cooking supper,  helping the kids with their homework, and walking the dog. I was amused when I read about one of his cases where a further brain tissue examination was required—Dr Shepherd returns home with the brain in an organ box in the boot of his car so he could take it to work the next day – little details like these jar you – how much effort it takes to mentally compartmentalise this job and the family life…I don’t know…I mean, there’s a brain in the car… It is no wonder that post-retirement, Dr Shepherd did suffer from PTSD, and this book sort of became a part of his recuperation.

If you are a crime writer, this book is a great reference; I'd say a must-have. But more than that, for me personally this book is special because it speaks of biological death with the honesty it deserves – neither mystifying it, nor glorifying it. The detachment which Dr Shepherd describes as his personality trait is evident in the writing too, which helps you view the human body with a lot more respect. His passion and commitment towards his profession shines through every page - it’s truly a new perspective when your body is described as “For blood is not just red – it is bright red. The gall bladder is not just green, it is the green of the jungle foliage. The brain is white and grey – and that is not the grey of a November sky, it is the silver-grey of darting fish. The liver is not a dull school-uniform brown, it is the sharp red-brown of a freshly ploughed field.’  What a lovely reinforcement of the description in our Sharirika Upanishad, where the human body is described as the essence of the earth, water, air, fire, and sky.

This is a unique book, and if you are not squeamish, you must read it.
© Sumana Khan 2020