I admit, 80% of my book shopping is largely based on the book cover and the blurb—I’ve delightfully discovered authors whom I’ve never read before this way. During one of my pre-lockdown bookstore raids, this book titled ‘Elevator Pitch’ caught my attention. Not least because Stephen King has an endorsement on the cover (if King recommends eating lauki, by god I’ll be grating the damn thing before you can draw another breath), but also I’m a bit tired of domestic noir, and murders in an elevator sounded different, promising. I’ve not read Linwood Barclay before (I panic at the thought of how many more authors I’ve missed). 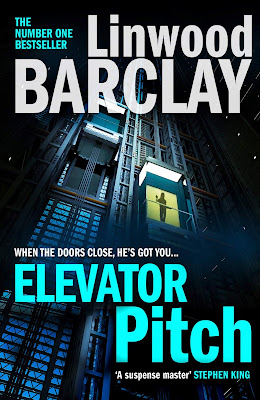 'Elevator Pitch' unfolds in Manhattan where on three consecutive days elevators in three random buildings plunge, killing its passengers, including an influential media head, and a Russian scientist who has inside knowledge of Russia’s bio-warfare programs. When sabotage is discovered, the controversial love-him-hate-him-can’t-ignore-him Mayor Richard Headley must take an unprecedented decision of asking all high-rises in the city to stop their elevators and have them security-checked. The enormity of this seemingly trivial decision dawns on you as Barclay beautifully narrates the disruption—in a city like Manhattan, ordering the closure of elevators causes havoc and deaths, with people living in high-rises stranded inside their homes or in lift lobbies – how do you climb 50 or 90 floors? Reading this book at a time like this I could not stop reflecting on how much quotidian urban lifestyles are shaped by a city’s architecture, and how fragile this dependence is.

In a seemingly unrelated investigation, detectives Jerry Borque and Lois Delgado are working on a gruesome murder case where the victim’s face was pulped beyond recognition and his fingertips were chopped off to avoid fingerprint identification. After a good beat work, the detectives discover that the dead man was incidentally an elevator serviceman. And then, there is the fringe group ‘The Flyovers’ indulging in domestic acts of terror, presumably their way of teaching the rich east coast Americans a lesson. As the reader you weave in and out of these chaotic threads as if you were driving through the bumper-to-bumper Manhattan traffic, and you finally arrive at a dramatic, very filmy climax.

The book is crowded with characters, just like the streets of Manhattan, and how do I put it…every chapter is busy. There’s Headley with his team that includes his son Glover whom he insults all the time; there’s the journalist Barbara,  a pain in the ass for Headley because she never misses a chance to pin him down with uncomfortable questions, and writes scathing articles criticising him; there’s Barbara’s daughter Arla with whom she has a difficult relationship; the two detectives Borque and Delgado, and many other secondary and tertiary characters, some of whom appear only in a single chapter.

The book is kinetic, not in the sense of high-octane action, but you get the sense of constant movement – every character is on the move – no one is sitting by the window and thinking of things, for example. Everyone is chasing someone or something – Barbara is chasing her story, the detectives are chasing their leads, Mayor Headley is, well, running around in circles. I do suspect this book may not be up to everyone’s taste. The narration has that traditional framework – the story unfolds within a week, so we develop just a nodding acquaintance with the characters presented in third person. Which is rightly so because the plot propels the characters—this is unlike the more recent trend of using several first person POVs to drive the plot, which can be exhausting in its own way. I admit, although I knew this is a crime novel, I sort of expected a bit of a psychological jolt – maybe because action in closed spaces such a lift is a fertile ground for claustrophobic thrillers – maybe I was subconsciously thinking of the horror movie Devil, where the entire story unfolds inside a lift with the occupants dropping dead like flies one by one. Also, the opening of this book does not adhere to the ‘first paragraph should grab your throat’ unsaid rule, (which sometimes grates on me actually) – Barclay takes his time to build the action in the first chapter, even including a quick backstory, defying the myth that ‘the reader will lose interest’; no, I did not lose interest. A well-executed first chapter, even if it just sets the ball rolling downhill slowly, is just as effective as the jolting opening line of The Day of the Jackal - "It is cold at six-forty in the morning on a March day in Paris, and seems even colder when a man is about to be executed by firing squad."


Actually, 'Elevator Pitch' took me back to my teens and early twenties in Bangalore where I would pick up dogeared, yellowed books smelling of naphthalene from footpath sellers. Most of these were by authors whose names I don’t remember (tragic); the book covers were beautifully illustrated (no computer generated graphics), and these pulp-fictionish books were crime thrillers set in the rich, glamorous boroughs of New York or Beverly Hills—murders, art thefts, and diamond heists sort of stuff. These were fast reads—an afternoon in the sun, eating kaLLepuri or congress kadlekayi. I’m sure like me, others of my yet un-travelled generation of DD era became familiar with those curious American urban architecture terminologies through these books – the ‘blocks’, the ‘avenues’, the ‘streets’, the ‘boulevards’ – yeah, it was in one of those crime books (a mafia don’s girlfriend (invariably blonde, buxom, green eyes) falls in love with the cop chasing them (invariably very Dirty Harry)) that I learned about the NY-Manhattan ‘grid’: avenues run north<-> south and streets run east<->west. Barclay’s lucid description of the lay of the land weaved into the conversations took me back to those days...so although I've read better crime novels, I guess I am partial to this book.

If the sun is shining wherever you are, and you want to revel in the silence of the lockdown afternoons, give this book a try.