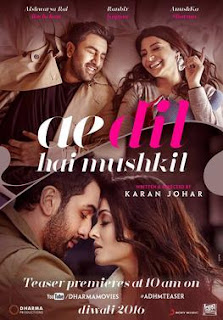 ADHM was a good break from the daily drudgery. Great music, great aesthetics. In KJo’s world, there is no ugliness – no angry police officers, no beefed up middle-aged men, no hordes of demented villains. There is no growing up either. And that’s what is refreshing. Of course there is the usual caveat – don’t go looking for a cerebral experience.

In this movie, as a part of the ugliness hatao theme, everyone is kind of super rich and live on their own in designer apartments and townhouses in London. This removes the need for pesky parents and other annoying relatives who might distort this beautiful fantasy life. Also, the characters don’t have to worry about EMIs or plan their retirement or fret about the high tax bands in UK. They can focus on the affairs of the heart entirely - getting their hearts broken/mended/broken again in infinite cycles. Indeed none of the characters hold a day job; no complications of stressful bosses, wicked colleagues, and office politics mar this beautiful world. The daily irritations of getting squashed in the tube etc are removed with one stroke. Ranbir and Anushka’s characters are funded by their wealthy parents, while Aishwarya is presumably funded by a great divorce settlement.

Ranbir is an MBA student  (who actually wants to be a singer), who has a private jet to fly around. Anushka is a poet/writer or something (I may have misunderstood) but we never see her put pen to paper. Aishwarya too is a published poetess. Only, unlike in the real world, where poets are the most neglected lot in the publishing world,  Aishwarya is able to give away  thick hardbound copies. Her success is also evident in her wardrobe, her sighs, hushed tones, conversations in Urdu couplets, and of course, her ultra posh home – not sure if that was in Vienna or London...I lost track.

Everyone is beautiful with glowing skins, perfect BMIs and impeccable, porcelain veneer dentistry. Not a patch of dark skin or out-of-proportion body in sight. They are always perfectly turned out in designer clothes, matching makeup, boots and handbags irrespective of the status of the heart. Their designer homes are stuffed with crystal knick knacks that, in real life, you would only window-shop in John Lewis or Harrods. Not a question of affordability, but who can spend hours dusting, really?  And those damned misshapen Arabian vases and lanterns will surely break anyway. KJo puts his characters in sprawling homes in London. You can’t help but wish wistfully. In reality, shoe boxes are disguised as apartments where you have to rest your feet in the kitchen cabinet when you lie on your bed. Reality sucks. KJo creates a world of mellow lighting, cosy fire places, Egyptian cotton and silk sheets that are crisply ironed (okay, what else do you think a homemaker will notice?), and automated blinds.

What’s the story you ask? If you really must know, it is this: A loves B, but B friend-zones A. B loves C, breaks up, makes up, marries, breaks up with C. D loves A but in a pre-emptive strike, friend-zones him because A can never love D the way he loves B. D has also friend-zoned E, her ex-husband. You sort of have a new-found respect for KJo – making a movie out of that set of equations, and keeping it sparkling for at least half the movie – that’s awesome.

In general, in this beautiful world, all that the characters have to do is go to the disco, and do other unholy things which are haram like drinking alcohol and having (and enjoying) sex.  Also, in this beautiful world, everyone is of course very nice to everyone else. And, so mature. I mean, sure, Ranbir cries more than Nirupa Roy and Pandari Bai put together, but still. Like...in real life, in an airport lounge, if a slightly sozzled young man approaches a lady minding her own business and tries to strike up an uninspiring conversation, in the worst case, his mug shot will be plastered all over social media. Or, the lady would have “alerted the authorities”. Not in KJo’s beautiful world.  No, none of this ugliness takes place. The lady simply leans forward and declares she sees a lot of pain the eyes of this doofus and encourages him to let the boohoos out. Next thing you know, they are hooked up and doing the hanky panky in public places.

There is no ugly friction between past and present relationships either.  The ex-husband is so kind and polite to ex-wife’s current boyfriend, he even indirectly compliments the toyboy’s sex life with ex-wife.

Ranbir and Anushka have done a really good job despite limitations in the plot-less script that keeps their characters fairly one dimensional. Ranbir’s interpretation of a guy who simply can’t get over a girl is refreshing. He shows the right amount of angst when allowed by the script. There’s no vulgarity – either in dialogues or in the form of narcissistic violence, and more importantly, no item numbers. Of course, if it were me, I would have ended the movie an hour earlier. Maybe I would have even gone as far as hooking up Anushka with Aishwarya, just to make things really mushkil...and sort of bring in diversity in the whole scheme of things.

If you are afraid the movie might taint your patriotism, fikar karo not. The gentleman from the neighbouring country has a fleeting role and in the few frames where he does appear, between his luxurious mane and ferocious outbreak of facial hair, you can hardly register a glimpse.

Considering the ugliness that constantly invades our lives via TV, news and social media – ADHM’s fantasy world is poultice. The music and lyrics are wonderful. If not anything, it gives you plenty of ideas to go wardrobe shopping.

Now if you’ll excuse me, I’ll get back to my grimy world of lime scale, oily T-zones, and less-than-pretty friends.