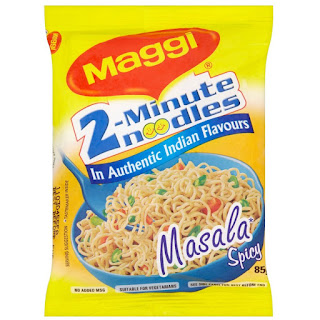 It’s been a tumultuous week, eh? Here I was, after moving homes and popping an artery packing and unpacking, looking forward to settling down with a bowl of Maggi and a screwed up horror movie, when Maggi made headlines. It was like...well...it was like you’ve been going out with this great person for decades...of course the person is not all perfect...but hell, s/he’s there when you need him/her the most, s/he’s dependable, accessible and then poof! You discover s/he’s a secret meth addict or something. Okay, that was a sad hyperbole. But still – come on! Maggi has become a part of Indian culture. It is to an Indian what a burger or a sub is to an American. Or Fish n Chips to a Brit.

No single Maggi-eater ever proclaimed Maggi was healthy. But it filled up a space where no other food item could.  Returning home at an odd hour? An hour where you can’t really cook and eat rice – say at 5pm or midnight. Besides, you’ve got to make another gravy for the rice – either dal or rasam. Midnight or thereabouts is also not an hour where you have energy to roll out chapathis and prepare a side for that. Unless you are super-organised, it’s also not an hour where you can smear dosas on a pan, or steam idlies . But you are hungry – so hungry. So the best option most of us reached out for was Maggi cooked with a load of veggies. It’s a one pot dish, and of course it does not get ready in two-minutes. But it’d be hot, tasty and filling. Of course, it is nowhere as healthy as roti and sabzi – but any day a better option than, say a pizza or a Chinese takeaway?

Am I supporting Nestle? No. I think the presence of lead is a serious issue, and they have to investigate how lead seeped in – most probably in a more downstream process of their manufacturing cycle. But what gets my goat is the sanctimonious  finger-wagging and I-told-you-so discussions. Not to mention the ridiculous fear-mongering about MSG or monosodium glutamate. This from people who stand in street corners eating pani puri and licking the pani right off from their elbows; or eating churmuri wrapped in old newspaper cones. These are the ones who tut-tut and call you posh if you said you don’t eat roadside food. The ones who ridicule your ‘fear’ and put all sorts of arguments about ‘how do you know hotels are clean’ and ‘but the guy is wearing plastic gloves’.

It so happened that during extensive research, it was found that glutamic acid has flavour-enhancing properties. In my understanding (please do correct me if I’m wrong) this is because of the salt of glutamic acid – monosodium glutamate. As such, glutamate is found abundantly in all food we consume – from our tomatoes to cheese to mushrooms. MSG was isolated in a study conducted in Japanese University – and it was found that MSG lent a savoury taste (termed as umami in Japanese). The result was that MSG was now manufactured as a food-additive – or a taste enhancer. Just like our garam masala. One of the brand names for MSG is ...yeah...you guessed it...Ajinomoto. Yup the small pinch of Ajinomoto which brings alive most of our Indo-Chinese cuisine – from manchurians to fried rice. Those of us who have experimented for the restaurant-taste also know what happens when Ajinomoto is added carelessly – it has a pukey-smell and taste. It has to be absolutely less than a pinch. Better still – don’t add at all.

So is MSG good, bad...a death-wish? Meh. In my opinion, anything manufactured artificially can be done away with. Including food colourants. I mean, I don’t even like people fiddling with my atta. 'Fortified atta', my left foot. Leave my atta alone. Butter mixed with vegetable oil to make it ‘less fatty’. No thanks. I like things as they occur (as close to as possible) in their natural state. I like to spread plain butter on my bread, thank you very much. Besides, we never know what else is added undeclared in the manufacturing process yes? But seriously, stop hollering about MSG as if it were snake venom (which is also a protein chain by the way). If you are so freaked out about MSG, stop eating mushrooms; stop topping your pasta with parmesan cheese; stop eating tomatoes, potatoes...

If one is a strict dietician, instant noodles would make you squirm. See for the noodles to reach you in those packs, they actually have to start off from a lump of dough. Like, our idiyappam from rice flour. In large scale manufacturing, the dough, let’s say wheat or just plain flour, is mixed with water, starch and salt. And other additives (depending on where it’s manufactured) such as phosphoric acid. Yeah, you read that right. Food-grade phosphoric acid gives the tangy taste because it acidifies the food. What do you think is there in your cola? Phoshorous salts are also used as leavening agents. Think dough. Think kneading. Think leavening agent. Anyway, the noodle-dough is kneaded (by machines obviously) – the act of kneading helps release gluten. Gluten is what gives dough elasticity. Yup. Maida dough for obattu, pizza dough...gluten is the hero there. Did you miss out on starch? We know in its pure form starch is nothing but this big fat carbohydrate, made up of big fat glucose molecules. Starch in food preparations acts as a thickening, stiffening and gluing agent.

So once the dough has fermented well, it is cut into strips and steamed. When it is steamed, the starch gets gelatinized and kind of holds the noodles in shape. So now that your noodles have been steamed, it has to be dried. Ah. There are two ways of drying it – either by passing really hot air on them, or by flash-frying them. Flash-frying is like stir fry – only you drop the noodles in really hot oil for a minute or so, just enough for the moisture content in the noodles to evaporate. Almost all the stiff instant noodles we consume go through this method. I guess this is where lead could have seeped in...if the cauldrons are not maintained well...and good lord if the oil is re-used. There are the ‘soft’ noodles that you get – they’re probably air-dried.

And, this is pretty much the same process followed for your regular vermicelli, rice shavige etc. The only difference is these Indian ‘noodles’ do not come with a masala packets.

So would I eat Maggi if it came back with a renewed and rigorous quality control? Don’t know. Depends on my options. I mean Maggi with veggies followed by hot chai or pizza with coke...the choice for me is always the former. Right now, I’m cool pressing out string hoppers made from plain rice flour.