Months ago, a friend got in touch with me. I think we corresponded after a gap of more than two decades. We were in school together. It was a given that Padmashree would stand first in every test and exam. Not because she learnt by rote, but because her IQ was a cut above the rest (and I was at the other end of the spectrum ;)). You’d think (and I’ve seen) that the academically-inclined usually formed their close-knit circles – but not in this case. There was a good balance of the studious ones and ones like yours truly in our group :)

Even so, I remember Paddu as a soft-spoken girl, always helpful and good fun in her own quiet way. Even as a child, she was a voracious reader – and I suppose that kept our group together – the love for books. I’ve spent many happy summer afternoons with other friends in Paddu’s house – sometimes calling spirits on a make-shift Ouija board; other times making ‘charts’ for the school class room. I remember the quietness of her house – there was a special silence in Malleswaram houses on hot summer afternoons – in Paddu’s house, the silence was punctuated by our giggles, or by her sophisticated gramophone scratching away as it recorded a serious AIR program for her mum.

The only time I’ve seen her distressed was when, in a particularly nasty Chemistry test, she was one of the six or seven (in a class of 40) who’d managed to pass. She was distressed because she’d probably scored the lowest mark of her academic career – nonetheless, the highest mark awarded for this test. I remember this vividly because I was absolutely shocked to see that I’d passed the test too – scored the passing mark of 45. The teacher was even more shocked – she actually re-counted and re-totaled my marks before handing over the answer paper to me in utter disbelief...as if she'd seen the four-headed Brahma next to me.

Naturally, I was not at all surprised when I connected up with Paddu and found that she has a PhD in a bio-chemistry branch. What’s more, when she’s not prodding molecules, she writes astounding poetry. Still, I was not surprised. But I was surprised when she asked me if I could edit her daughter’s story. I chuckled...how cute. Her daughter is 11. The working title of the story  was ‘Miscalculated Magic’...now it has been renamed as 'The Spilled Potion' :) 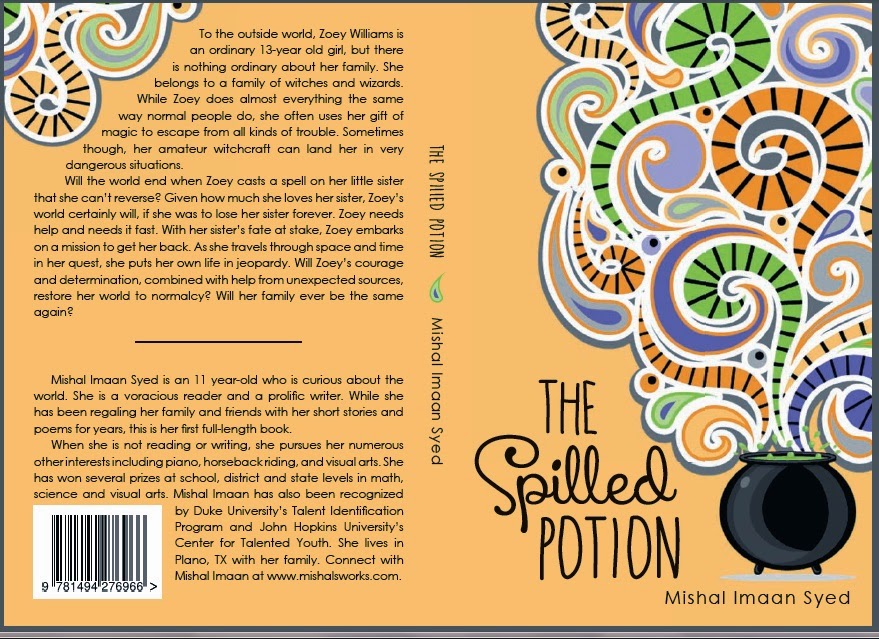 I sat down with the story right after my academic submissions. I was reminded of the many summer holidays back in primary school when, on the last day of the final exam, all I looked forward to was stacking up on the chaklis and reading tonnes of Secret Seven or Famous Five (later on, we graduated to Hardy Boys and Nancy Drew, but secretly, all of us continued to read Enid Blyton). I opened Little Mishal’s (that’s how I call her in my head) doc – only to realise it is not a ‘small’ story. It was a neatly formatted document; 42000+ words; 84 A4 sheets. Whaa?? Little Mishal is 10 or 11. Whaaa??? I was gobsmacked.

The surprise did not end there. I started reading and forgot to edit. I had regressed back into childhood – of curling up on the bed on a stack of pillows; munchies at hand; lost in the world of some strange adventure where grown-ups (or being one) were irrelevant. I was at once impressed by the narration, the strong voice of the protagonist, the complexity of the plot – and above all – the humour. It is only on the second round of reading that I started to edit. I did only line edits and did not touch anything else – I wanted to retain Little Mishal’s voice.

The story is quite unlike the magic world of Potter, and even though potions play an important role, there is no Snape-type character (thank god). Add magic and mischief – the result is a howlarious catastrophe. So there’s Zoe and her regular, boring family – Mum and Dad and a very cute, very annoying little sister Allie. Indeed, aside from the teensy fact that they are a family of witches and wizards, you’d not even notice them – because...well, they use magic only to do the dishes and other chores. It so happens that one day Zoe is so super-annoyed with Allie that she turns the latter into a bunny...only to realise she needs a potion to transform the bunny back to Allie! The catch – the potion does not exist – it will be invented only 200 years in the future. So if Zoe has to get poor Allie back, she has to time-travel!  Oh what a brilliant read! I enjoyed it so much.

Little Mishal’s portrayal of a regular family is too funny – for someone so young, she’s an astute observer of the idiosyncrasies of the grown-up world. Her imagination of a technologically advanced future world is quite stunning and...surprisingly believable. Her language is lucid, and way above average. I’m not talking just about the vocabulary – but also about her innate ability to describe situations, emotions, expressions, scenes and her structured thought flow. I wish she makes this into an adventure series – there is a lot of potential for more magic mishaps and mayhem!

The book is available on Amazon – both as paperback and ebook. What’s more, Little Mishal is giving away the proceeds to UNICEF’s Children’s Education Programs. Yeah Little Mishal is not so little where it matters. Bless you hon.