The Art of Chaklis


As an Iyengar, Gokulashtami is the most important festival for me. This festival has always meant serious business as far as I’m concerned – none of that easy cheer of a Deepavali. It is one of the toughest celebrations. Now those two words together are intriguing. But it’s true. The preparation for Gokulashtami is not for the weak-hearted. Krishna was born some 5000 odd years ago, in the month of July. Isn’t it absolutely fascinating that 5000 years down the line, we still herald His coming with the same fervour?

I don’t know how the tradition of making specific kinds of food for specific festivals started. But it interests me no end. Food, and everything that revolves around food – the way it is prepared, served, eaten – has always been an integral part of every ancient civilisation. Food keeps communities together, and is an essential component of the culture that is propagated down the generations. Elsewhere, I’d mused about the prasada made for Ram Navami – the ‘chitranna’ (lemon rice) and panaka (fruit juice, especially bael). Here is my theory that I shared with some friends - it is said that Sri Rama was born at noon. Hot, scorching, blindning spring-summer noon. Imagine the people of Ayodhya and beyond, congregating in thousands on the dusty fields and streets, getting baked in the sun, waiting to hear the word. And when the word came, it had to be celebrated. Perhaps the feast would've been richer had He been born in cooler climes. But like His life, the celebratory menu had to be threadbare and frugal. Bael fruit - auspicious, abundant - was used for the panaka or juice - to quench parched throats. Cucumber laced salad - kosambri- was just right to keep the tongue cool. Rice flavoured with tangy lemons or raw mangoes - chitranna - was just right to balance the bile in the searing temperatures. And thus, thousands of years later, we believers still follow this unusual celebratory menu.

So I always wonder about the menu we prepare for Gokulashtami. It falls in the rainy months of sharavana/bhaadrapada. Down south, we’d be well stocked with the spring/summer harvests of paddy and lentils. The summer months would be the time for making papads, sandige, and all sorts of sundried savouries. So the rainy season must be a great time for preparing deep-fried snacks that could be stored and savoured for months. And since Gokulashtami falls in this season, what better way to celebrate than prepare all these rice and lentil savouries, not to mention several types of ladoos? And mind you, these are not some slice and dice and throw into the hot oil kind of snacks. They required patience, perseverance and finesse. And, as Amma always said, a large measure of devotion. I can imagine the time of 'long ago' - families would get together for the preparations...arriving from other villages for a communal celebration. The men would be in charge of pounding the grains to flour. The women would do the kneading and frying. The children would do the counting and storing. Nothing brings people together like food does...yes?

The preparations for the festival would usually start a month ahead at my home. The panchanga would be consulted to figure out the date. And then, the budgets had to be reworked to buy extra kgs of rice, urad dal and so on.  As with every family, the bhakshanas made for this festival was not limited to the family alone – but was meant for distribution. So the measurements were never in cups, but in ‘seru’ or ‘paavu’ – large cylindrical tumblers. The target would be to prepare around 30-50 of each type of bakshana.

The entire processing would take place at home. First, on a reasonably sunny day, the rice and dal would be washed thoroughly and spread out on a cloth (usually Appa’s panche) to be sundried. Once they dried, we’d go to the mill, which we all simply called as ‘machine’ (read more here) to pound the rice and dal into flours. Then came the tedious part. Sieving. For this, we’d sit in the living room, far away from taps and any water sources. It wouldn’t do to get moisture in the flour. We’d sit on the floor, Amma, The Sister and I. Amma would sieve the flours, while my sister and I mainly hung around for the conversation. We’d get to hear of great grandmothers, or some far off cousin’s someone-someone who’d make 101 different types of bhakshanas, and other such historic records.

Once the sieving was done, Amma would bring out the seru to mix flours in proportions handed down to her from her mother, who, no doubt, got the info from her mother and so on. Chakli and thengol had the same base ingredients of rice flour and urad dal flour – but in different proportions. Muchhore had additional ingredients. Amma would mix them carefully and store them in aluminium dabbas that had been in the house forever.

Amma would prepare the bhakshanas a couple of days ahead of the festival. The Sister and I were more of sous-chefs, taking over each other’s tasks in shifts, while Amma never seemed to tire. My job invariably was to prepare the huge steel plate for the hittus (flours). A dollop of vanaspati went on the plate. And I had to rub it in, really smearing every inch of the plate. ‘Use the balls of your palm,’ Amma would instruct. The body heat was the perfect temperature to melt the vanaspathi. I had to rub it in till it became frothy, and then finally, there’d be no sign of it, except for the shiny greasing on the plate. Then Amma would measure out scoops of chakli hittu or thengol hittu. This had to be lightly spread around the greased plate, just enough for the flour to get coated by the shortening. Then came the hing water. The hing, dissolved in a tsp of water, was sprinkled on the flour. The amount of hing mattered. A lot.  Hing itself has a pungent aroma – too much of it will overpower the rice and urad flavours, apart from altering the taste. Cumin and white til would be sprinkled, and then finally salt. All this was done on ‘kann alathe’ or literally, ‘measurement by eyes’.  Once all this was done, the hittu was ready to be pressed. The cardinal rule was - never, never pour water on the hittu all at once, kneading a large ball of chapathi-type dough.  The dough would dry out fast and it would become difficult to press the chaklis/thengols. The trick was to use small quantities of water, just enough to knead in a dough-ball fit for the chakli press. Slow, but exacting process.

Now came the tricky part. It was not just enough to use only your eyes while doing all these preparations. Touch and olfactory senses were very important to predict the outcome. For example, the taste of the chaklis/thengols could only be described by ‘sound’ words. If it was gari-gari, melting away crisply in your mouth, then it was a perfect chakli. If you had a katum-kutum chakli that was hard to the bite, or if you had a very brittle chakli that literally powdered on the touch, then your dough was screwed up. The dough that went into the chakli press had to be firm and pliable. Only this would result in a gari-gari chakli.  If it was too soft and soggy, the chaklis would come out katum-kutum. So when one made the dough, it was good sense to just bounce it gently in the palm like a cricket ball. If it is the right texture, then the dough won’t stick to your hand. If it has excess water, then you can see bits of it sticking on your palm as you bounce it. But a better test – when you press out the dough, if your biceps are challenged and you grit your teeth, then you have a winner. If it came out too easy...oh oh.

Now pressing out the chakli itself is an art. Amma’s rule was three concentric rings – the end point and the starting point had to align. Why? Because it is an art. And art demands perfection. Thengol and muchchore, the multiple stringed templates, did not require such harsh scrutiny. Even so, one had to be careful while ‘cutting off’ – so as to not form a lump. The oil had to be hot, but not smoking. And there was a method to safely drop the chaklis in the frying pan without splashing oil, and without ruining the circular structure. You have to gently slide it close to the side of the pan. When they are nearly done, you have to concentrate on how they feel against the ladle. If they feel solid, that is a good time to remove them. Otherwise, they become red, then brown – and no true connoisseur of chaklis likes such discoloured ones. They have to be ‘golden’. So the trick is to remove them when they are still pale (yet solid) in the oil. All deep-fried savouries continue to ‘cook’ for a few minutes even after they are removed from the oil. And so a pale chakli once removed from the oil, would turn the right shade of gold as it cooled to the room temperature.

But the tougher ones are the sweets. The chances of ruining a perfectly simple sweet recipe are very, very high. The consistency of the sweet depends on the string of the sugar solution, the way the ingredients are roasted and the temperature at which the ‘unde’ or the ladoo is made. Whenever Amma stood roasting besan in ghee for mysore pak or besan ladoo, she’d say, ‘Concentrate on your nose.’ Well, that was easy given that the women in my family possess noses that jut out like the Rock of Gibraltar. And so we’d stand there with flaring nostrils – tracking the progress of besan through smell - from raw to the roasted aroma. 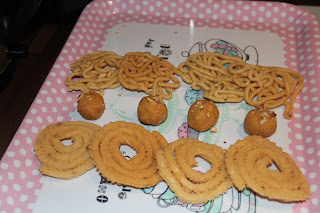 This Gokulashtami, after 7 years of Amma’s passing on, I summoned enough courage to try my hand at a couple of bhakshanas. Of course, I had to take a shortcut - readymade rice flour and urad flour. The Sister is an expert – she has Amma’s good genes and annapoorneshwari touch. I’d give a passable C for my efforts. The chakli and thengol bordered on katum kutum, although the colour was good. The kobri mithai did not set because of imperfect sugar syrup. But there is always next time. But as I stood preparing the chaklis, hearing Amma’s voice in my head, I promised myself to do this every year. Not because of anything remotely spiritual – but because this is a culture, a legacy that we can touch, feel, digest. A culture that brings people together for at least one evening - a luxury considering our busy, isolated lives. A legacy that is almost lost thanks to the invasion of All Things Processed and Potato.

I hope someday, I can teach my niece all this. Yeah...The Sister can teach her other things about Life – me...I’ll teach her the art of chaklis. The devotion behind it. And how it had held a community together.