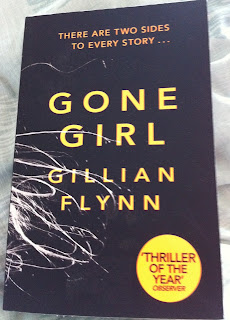 After months of arduous literary reading (some of which made me pull my hair out); I decided to treat myself to a good old crime thriller. ‘Gone Girl’ came highly recommended; and I grabbed a copy. It was a pleasant couple of days, I must say.

‘Gone Girl’ written by Gillian Flynn comes with heavy-duty reviews. My copy came with an eye-catching orange label that screamed “‘Thriller of the year’- Observer”. Well, I tell ya...I was salivating as I turned page to 1.

So there’s Amy and Nick Dunne - love birds who get married. Amy is rich, famous, accomplished, beautiful, funny...the perfect vision men have for a wife. Nick is working class, sloppy, lopsided, warm, sense of humour, easy going – a perfect boyfriend. Perhaps not an ideal husband. Five years down the line, their marriage is on the rocks. Both of them are made redundant, and while Amy has plush funds to back her up – Nick is ass-broke. He gets to know his mother has a terminal illness, and decides to move back to his home town to be closer to her. He does not really think it necessary to take Amy’s opinion. As if that’s not upheaval enough, he borrows money from Amy to set up a bar (The Bar) in his hometown with his twin sister. And so, they bundle up and drive away from zany New York to tacky North Carthage, Missouri.

On their fifth wedding anniversary, Nick is at work when a neighbour calls him to say the door to his house has been left unusually wide open for quite some time. Nick heads back home. The door’s indeed open; the furniture in the living room has been knocked about...signs of struggle; the iron is plugged in with a dress waiting to be ironed – but no Amy. Amy’s disappeared mid-morning. Snatched away while doing her chores, it seems. Luminol reveals there’s been extensive bleeding on the kitchen floor – and someone has wiped it clean.

As the investigation proceeds, Nick emerges as the ‘person of interest’. Yup...he’s got all the motives. He’s cheated on Amy. Maybe she found out, demanded her money back...and he killed her. And then there’s the age-old telltale – insurance. He had upped her cover recently. And now she’s gone. Who stands to benefit? Oh oh. There’s all those credit bills with expensive items. Nick the loser, Nick the pleaser, Nick the ‘can’t ever confront’ coward, Nick the ‘can never say no’ whiner insists he did not buy those things. He withholds information, has no alibi. He does not behave the way a husband-whose-wife-has-disappeared should behave. His facial expressions in front of the cameras are inappropriate – who on earth will smile at such a time? Nick. Nick can smile because he’s an asshole we’re told.

So. Was Amy abducted? Was she murdered? Where is her body? Is Nick being framed? He may not be the brightest spark ; maybe he’s just a harmless guy who wants an uncomplicated life...and it somehow got complicated with Amy in the picture. He grew up in a family where his abusive father said he was good for nothing, and his mother smothered him with love...and he figured the best way to be liked by everyone in the world is to just agree and nod along. And now, with the shit exploding in his face, he does not know what to do – there’s nobody to tell him what to do. Momma’s dead. And know-it-all, I-told-you-so Amy is missing.

To her credit, Flynn has managed a remarkably taut narration. I’m wary of multiple first person POVs. The only book where I enjoyed this type of narration was Dracula – where we hear many narrators in first person through journals and diaries. Flynn has used a similar technique – though the time frame is complex. We hear Nick in the present, in the now. We get to see their marriage in retrospect through the missing Amy’s diaries. So in effect, we know more about Nick through Amy’s voice – and we can get to see bits and pieces of Amy through Nick’s disjointed thoughts. It is no mean feat to maintain different time tracks – both in first person. The individual voices of Nick and Amy are beautifully developed; the transition between them is very smooth – the reader automatically ‘adjusts’ to the change of tone.

I also loved the fact that Flynn has steered clear of all the pop psychology jargon. She allows the reader to draw conclusions. She’s merely made a T-section on a typical marriage and revealed the innards for us readers to poke and prod and examine. In fact, the book is more of rhetorical question than a thriller (as far as I am concerned) – is marriage the most overrated thing on this planet? All that tip-toeing around, all those mind-games, all those prove-that-you-love-me moments, all that wearing a mask and dancing around, all the Being What Is Expected Of You rather than just being...

The twist, when it comes, is not ‘gut twisting’ (at least not for me) – but it was certainly eyebrow -raising. I have to admit, I felt deflated, and I have only my expectations to blame. Mundane expectations at that – psychological thriller = cat & mouse game. I felt a good chunk could’ve been edited out too – some sub-plots seemed too contrived for this otherwise stellar, realistic narration.

Ah well. It was a refreshingly different book. And it does make you think – who knows what goes on behind closed doors? As the Financial Time says – ‘Read it and stay single.’

The back cover quotes the Mail on Sunday – “Gone Girl is a book you’ll be begging other people to read, just so you can discuss it with them”. Well, I won’t be begging you...but do read it. For the sheer pleasure of Flynn’s characterisation.