Art Of The Matter


I’ve never understood expressionist art. The Scream (pictured here) is reportedly going under the hammer for £50 million. All I can say is I am kicking myself for not having saved my childhood scribbles. They were even more scary ass, and all the untainted, exaggerated emotions of a loopy child were captured in those ‘paintings’. Pure expressionism if you ask me.

But I’ve always suspected there is a surreal expressionist (did I just coin a new genre?) lurking within me, waiting to burst out in a shower of rainbow sparks. You see, right from childhood, I’ve been fascinated by colours. During the ‘art classes’ where we had to fill in outlines with recommended colours, I’ve gone ahead and painted purple crocodiles and fuschia elephants. Also, I had no sense of proportional sizes too, and for some reason, wanted to see everything in a geometrical framework. Errr...is that cubism? So the crocodile had a perfect rhombus of a head, and all his teeth were perfect isosceles triangles. A flower had orange petals alternating with magenta ones, and these were drawn with the assistance of a ruler. The flower was gigantic compared to the stalk. It was graded D-, but I liked the way the petals and colours just burst out of the page, disrespecting pre-drawn outlines – clearly the plant must’ve been fed on some radioactive manure. So far, the masterpieces were all crayon on ‘regular’ paper - we were in primary school then.

The happiest art class was when we learnt about primary and secondary colours. I was riveted by the combinations; although earlier painting mishaps had taught me valuable lessons – for example, never bring yellow and blue together if you don’t want green on your page; and that paint smells great, but tasting is a bad idea. The introduction of colour combinations was an important milestone. We graduated to water colours – tube paints. Amma took me to Malleswaram Sampige Road for the art class shopping – Camel tube-paints, a proper ‘drawing’ book with thick paper, brushes of different sizes and a palette. I was, for once, thrilled to silence.

I imagined myself leaning over a large canvas balanced on a monstrous easel painting away to glory. Of course no such thing happened. We were now into painting portraits and ‘sceneries’. The first portraits were a disaster. As children, we knew ‘skin is pink in colour’. I knew it was wrong – the faces looked like they had overdosed on Gelusil tonic. The better artists informed us the right combination for a good skin colour. Yet, I was not happy with my faces. I could never capture the light effect. Invariably one or the other feature of the face took prominence (remember my problem with sizing?) – sometimes the eyes jutted out of the face: huge blobs of tartar sauce with grapes floating aimlessly. Or the nose would rise like Everest, and for some reason, I would have taken great pains in shaping the cavernous nostrils. The lips would always be misaligned, like lovers parting ways in opposite directions. Needless to say the face would take all my effort and attention, and I would neglect the rest of the frame. In fact for me the body was inconsequential, I only wanted to show the face. Thus I had a series of bizarre, distorted faces fitted on puny bodies.

However, I was keen on improving the error of my ways. I was determined to get the proportions right. Thus, my mythology series was launched at the back of question papers, during exams. I usually finished my exams well before time (except English), and it had nothing to do with efficiency. I did not know the answers, period. Realising the futility of trying to squeeze non-existent knowledge from my dry brain cells, I put the time to good use. I practised drawing full-length body frames – Lord Rama being a favourite for some reason. I vividly remember scraping through in Chemistry, my equations remained hopelessly unbalanced; but Lord Rama looked insanely happy, completely dwarfed by his bow which towered over him like Eiffel. 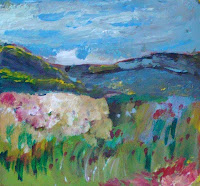 Two summers ago, I was so euphoric on seeing wild flowers by a river side that I just wanted to paint. I never do anything from Step 1, since I am nature’s eternal wiseass; I thought it will be perfectly fine to try out acrylic on terracotta. Acrylic on paper itself is tricky, given the nature of the paint, and here I was with a terracotta tile. Well, all I can say is that a bright sunny day turned into a dark and stormy mess on the terracotta.

I stick to portraits now, mainly pencil sketches. I suppose I do a reasonable job but I find them so boring when compared to my childhood burst of colours and afflicted faces.

Having seen some of Picasso’s stuff, I’m given to understand that today, my childhood experiments would have been worthy of going up on Tate.