The Tourist And The Poet

﻿﻿﻿
﻿
The last leg of our Scotland trip ended at Inverkip - a beautiful town/village near Glasgow. A 7-hour drive would bring us back home to bland, bald Reading. The weather on the return journey was made to order - sapphire blue skies and pearl clouds topped off with excess sunshine.

We took a break a little ahead of Manchester - at a Services spot somewhere near Kendal. We spotted picnic tables at one end of the parking lot - just perfect! We had packed a sumptuous lunch that befitted the picnic spot. But really, nothing could have prepared me for the view. I won't even bother describing it - take a look at the photos.

We oohed and aahed for a bit. Then growling tummies took over and out came the lunch. Phulkas, sabjis, salads, mishtis, juice, tea, biscuits. We ate happily in the warm sunshine, cleared up and headed back to the car. Of course I could not leave without taking a few photos of the place. I headed back with my camera.

Just as I was selecting my perfect spot, another weary traveller came by. He was a biker – all leather clad. His hair was all silver and fell about his face in unkempt curls. He was perhaps in his late fifties. There was a swagger about him – clearly a veteran road hog. We greeted each other and I went back to my camera business. He sat down at one of the picnic tables and brought out his lunch - a can of Stella Artois and a sub. I finished clicking my photos and turned around. “Heaven,” he muttered to himself. He left his lunch unopened at the table and walked away hurriedly towards the car park. He returned within a minute with a large guitar case. I could not leave now; I had to listen to whatever he would play. I clicked some more photos. 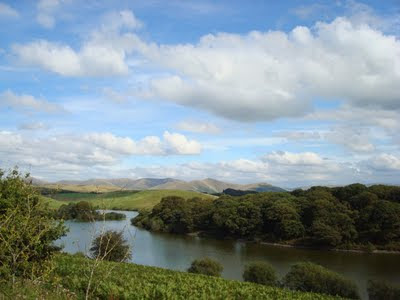 The biker shoved his food to a far end of the table. He brought out his guitar and looked around the emerald green slopes and the mirror lakes. He started playing his guitar. To me, it sounded like he was composing a new tune then and there. As far as he was concerned, the world had stopped. The time had stopped. Nothing else existed for him, except for his music and his muse. His hunger and thirst were long forgotten. This tune was his offering to the beauty around him. I’ve never heard the tune before, and in all probability will never hear it again. In fact, by the end of the week, I’ll probably forget what it sounded like.

But I’ll never forget the magic of the moment – the stillness of the afternoon, the stunning view, the sun burning my face - and the hesitant tune caressed out of the guitar by this old biker – an unlikely poet. Yeah, some would probably call him a musician, but for me – he is a poet of wordless poems. Where ever you are stranger, I wish you joy and many, many more such inspiring moments. And thank you for making that lazy afternoon memorable.