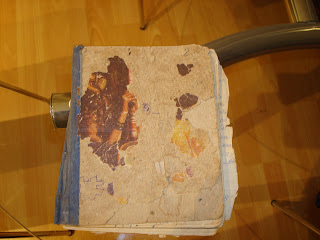 It’s hard to imagine Moms and Dads as youngsters isn’t it? They always seemed like such dorks when we were growing up. And when we finally ‘grew up’ and built our own nests, Moms and Dads became the infallible, indestructible Gibraltors of our lives. It is really difficult to imagine the Dads goofing off and loafing around during the college days. It is really difficult to imagine the stern and ever-so-practical Moms simpering over Rajesh Khanna. And that’s why, this particular book is so invaluable to me. It is probably 40 years old or more. It’s my very own time machine. Like Calvin’s cardboard box. Like Dumbledore’s pensieve. All I have to do is open those pages, and tumble into Amma’s younger days.

First of all, it looks like she had this note book right from college. She got married while she was studying, so she must have brought this book to her new home, which makes it all the more endearing. I can almost imagine her, a shy bride with her precious and sparse belongings, accepting a new home and new family as her own. And how typical of her to have carried a book with her!

Also, it looks like it was her Chemistry notebook in college. There’s “State the important differences between mixtures and compounds. Illustrate you answer with an example.” And - “Under what conditions does hydrogen combine with Chlorine, Sodium, Ethylene?” and so on. These were the college notes of the early seventies. And I realize that I broke my head over the same things in the 90s! Her handwriting is clear and neat – just like her character! 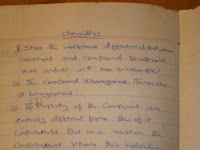 After a couple of pages, the Chemistry notes give way to a lot of bhajans and shlokas that I grew up with. The lyrics are neatly written down in Kannada, and as I run my fingers over the words, I can see her in our small kitchen, humming away some keerthana of Purandara Dasa or Thyagaraja, as she went about her chores.

And of course! The most precious legacy of her magic hands – the timeless recipes! Recipes that she received from her mother and aunts. It’s a treasure trove of recipes that most of my generation no longer prepare at home. There are recipes for pickles, ‘sandige’, exotic sweets, cutlets, savouries, jams, jellies...and even detergent soap!

Those were the days when there was no concept of ‘bottled’ pickle being sold in kirana shops. Everyone made their own pickles at home. I remember large porcelain jars – specifically used for pickling! Every house had a couple of such ‘Uppinakaayi jaadi’. Same was the case with pappads and crispies, known as ‘Sandige’ in Kannada. Summer used to be sandige time. All the ladies of the road would get together and prepare the ‘batter’ for the crispies. Some would be made of a mixture of rice and urad daal flour. Some would be made of sabudaana. I remember Amma getting up early and keeping the batter ready. Then we would troop out with large plastic sheets and bricks to any neighbour’s house that had a terrace. The plastic sheets would be spread on the floor, bricks weighing the sides down - you see the batter had to be spooned onto the plastic sheets in small dollops, and sundried.

The sabudaana sandige was easy enough, and we kids were allowed to help her. We had to take a scoop of the gloop in a small ladle and smear it on the plastic sheet in a small circle. The rice crispies were tougher. They had to be put through a perforated press that would bring out the batter in a ‘noodly’ form. The consistency and temperature of the batter was key here, and it had to be done fast! All this had to be done by 7 or 8 in the morning, so that the sandiges get the best of the searing sunlight. I remember those lovely summer mornings with all the aunties bent over their plastic sheets – laughing and chatting and exchanging cooking tips. We kids had the important task of guarding the sandige as they sundried – we had to shoo away the waiting crows and sparrows, and after a couple of hours, we were supposed to turn the crispies over so they dried evenly on both sides. Amma had two large aluminium containers which were lined by a plastic sheets. She would store the sandiges neatly in them – to be fried on special occasions or whenever bisibelebaath was prepared!

Those were idle summer days, when we kids could sit for hours – without TV, without Nintendos and XBOXs – just making up our own games and stories as we watched the sun dry our sandiges. We did not care about sweating it out in the searing sun, blackened like coals as we played our ‘just-invented’ games. There was no fear of sun-tan, no fear of skin cancer, no fear of dehydration (we used to drink litres of tendercoconut water...did’nt we?)

Ahh! Amma has written down the recipes for the lip-smacking rasam powder, sambhar powder, vangibaath, yengai...yumm! I suppose the same recipes have been around for generations! Preparation of these powders used to be a ‘once-in-a-quarter’ affair. Spices were to be roasted in a particular order, and in particular proportions. Once they cooled, they would be packed in big steel dabbas, and then we had to head out to the ‘Machine’. Yeah, coming to think of it, these ubiquitous shops were known as ‘Machines’. It was basically a shop with this monstrous machine, which made horrendous sound while in operation. From one end, the owner/machinist would feed in the whole spices, and from another end, the spice powder would emerge. Now, there were specific Mom-rules here too. These rules were followed by all Moms. We had to first check what had been put in the machine earlier, so that the taste of our powder does not get adulterated. If someone was waiting to get their whole raagi (millet) seeds powdered, it was common sense and decency to wait for them to finish. And so, the ‘Machine’ was another place where Mommies would hang out exchanging news, while they waited for their spice powders to be done. And of course, the stern inspection of the powder – the rasam powder had to be absolutely fine, the sambhar and yenghai should be slightly coarse. The sambhar powder had to go in only after the rasam powder is done...and so on! Phew! But the machinist was more often than not, a pro. These creatures know the intricacies of South-Indian spice preparation. Once the machine job was done, we would go home, and Amma would lock us kids out of the kitchen lest we get the spice in our eyes or nose; you see she had to sieve the different spice powders to ensure clumps are filtered out. She would emerge after a while – tears stinging her eyes because of the pungency, yet triumphant. Her perfectly balanced spices were ready, and packed in air-tight containers for use! 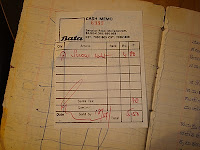 Another nugget of a memory! Tucked away in a corner of the book is this sales receipt from Bata – possibly from the early 80s. It was for ‘Snow White’ costing Rs.5.50! This was a ‘white’ polish for the white keds shoes that we had to wear in primary school I think (before they mercifully switched over to blue canvas shoes). Keds had to be worn once a week when we had P.T. ..and it was a pain maintaining them. Well, why am I complaining...it was Amma all the way – washing the keds, drying them, and then spanking our butts to make us sit and ‘polish’ them.

And her usual financial account – rent was Rs.300, Gas and kerosense was Rs.100 and so on!

It also looks like I first discovered my self-proclaimed talent as an artist in this notebook of hers. Perhaps I was bugging her no end, writing on walls and eating chalk pieces instead of using them on a slate – so she spared this book of hers! Some of my art pieces -

When I look at this book, I think – my God! How active, how full of life Amma was! Never a dull moment – always trying out something new! She was probably in her mid-twenties when this notebook ran out of pages – and she has left a legacy of spirituality, recipes and innovations! How diverse! And above all, how useful to me and my sister. And perhaps for future generations too! On the other hand, I remember, with a squirm, that when I was her age, how frivolous I was – drawing hearts with arrows around Kurt Cobain’s name written in red sketch pen! Yew!

That had me thinking about ...well, myself. Will my children, if any, have a chance to reminisce about me after I’ve finally kicked the bucket? Well, first of all, the logistics – will this blog server still be up decades later? Should I save all this rubbish I dribble in a blog in a USB stick and pass it on as legacy? Will USB sticks still be around at that age? Maybe I should write down each blog in longhand. Coming to think of it, when was the last time I used a pen to write something? I took a look at my blogs again. There’s ranting against corruption, there’s ranting against journalism, there’s ranting against thin models on a stupid TV program, there’s ranting about how everyone have ignored the Vedas, there’s ranting about my weight...oh my god...! Fifty years down the line, if someone reads this – they’ll say they had a senile schizophrenic woman in the family tree. Guess I’ll leave the blog as is, in a digital format.