Bright Side Of The Moon 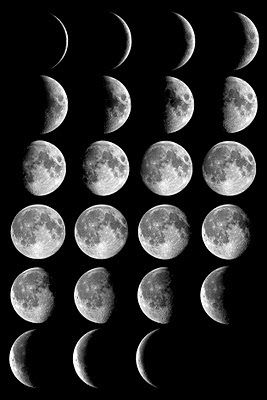 If you ventured into this blog, hoping to find out about vampires and werewolves and people who turn into dogs and other animals...sorry to disappoint you. This is really about the moon. But in my next blog, I promise to write about these fascinating creatures...so there!


After my 10th standard, (which I completed about 600 years ago), I don’t think I’ve given geography and astronomy much thought, least of all to the moon in particular. It is of course a fascinating subject. But thanks to our examination formats, I ‘learnt’ the facts by rote, without understanding the ‘why’ behind the facts. All other ‘knowledge’ was gained by hearsay and Hollywood and X-files type conspiracy theories. A friend of mine, another dodo like me ‘found’ out about blackholes. “If you manage to travel through a blackhole, you will travel back in time,” she had told me with conviction. Well, that happened to me a lot of times at work, especially during meetings. Then of course, there was the email that claimed that the landing on the moon was humbug and make-believe. And then, the face that appeared on Mars. And about how schizophrenic serial killers keep time with the moon phases. And about how NASA does experiments on alien creatures in secret labs under Arizona desert. Crop circles. UFOs. And many, many more. I am neither a believer nor a non-believer. I just find all this thrilling, a break from a mundane life.

So yeah, up until yesterday evening, for me, the moon was this thing in the sky which affected the tides. And yes, whenever there is a full moon, I love to switch off all the lights and listen to music in the ethereal glow of the moonlight that floods my home. And so far, my favourite moon stories have been Tintin’s Destination Moon and Explorers on the Moon. But yesterday, I learnt about the significance of the moon that made me feel humble; and now, whenever I spot the moon, I shall say a prayer of thanks.

I caught this program about Apache Point Observatory in New Mexico on Nat Geo. They were talking about the APOLLO (Apache Point Observatory Lunar Laser-ranging Operation) project. A set of reflectors have been installed on the moon’s surface (I think this was done during the manned Apollo-11 mission to the moon with Neil Armstrong and team). From a bunch of telescopes in the Apache observatory, laser beams are pulsed at this reflector on the moon’s surface. The beam (when I say beam, it is really in terms of photons) is reflected back. The time taken for each such operation is measured, and therefore, the distance is calculated. This has helped in accurately measuring the distance between the earth and moon – with accuracy to the nearest millimetre! Well, first of all, I found it fascinating that sitting on earth we can flash a light on to the moon’s surface. The distance of 385,000kms is traversed in about 2 seconds. So yes, in contrast, I thought about how we cover half a kilometre in two hours in Bangalore. Or for that matter, it takes nearly 2.5 days to fly from India to USA, while the Apollo 11 took 3.5 days to reach the moon (from Florida)! But was this distance between earth and moon not known? I thought our Aryabhatta had figured it all out thousands of years ago. Yes he had. But this APOLLO project also has other objectives – stuff to do with gravity and relativity theories. Also, this project has revealed that the moon is spinning away from earth at the rate of 3.8 cms per year. And so, what would really happen if the moon eventually orbits out of earth’s gravitational pull? I shrugged my shoulders. No more tides and eclipses perhaps. Boy was I WRONG. No moon, no life. Period. Did I hear wrong? I thought no sun, no life. Well, this was news!

Well, first of all, we know that the earth is tilted on its axis, at an angle of 23.45° to the perpendicular. The four seasons that we experience is because of this tilt. The earth has remained steady on this axis for millions of years, thanks to the gravitational force of the moon. It is because of this tilt that both the northern and southern hemispheres get to enjoy their place in the sun, influencing the evolution and behaviour of so many life forms. Without the moon, the earth would have wobbled on its axis, like Mars, bringing about catastrophic changes in the environment. This wobbling is capable of pushing icecaps of the Arctic and Antarctic towards the equator. Tides as we know it would not have occurred; ocean levels would have risen flooding land mass. Without the moon’s steadying influence, the earth would have spun faster on its axis, resulting in turbulent and destructive weather conditions.

All in all, without the moon, the earth would behave the way I’ll probably behave (when I reach old age) – senile, unpredictable, cranky and involuntarily destructive.

By the time this program ended, the moon was rising over the horizon, and never have I enjoyed a moonrise so much!

While everyone worships the bright, glamorous, colourful, powerful sun; the moon, visible only through the reflected glory of the Sun, has quietly nurtured life on earth in its own way.

And that made me think about life itself. How often we get enamoured and caught up by someone’s in-your-face importance in our lives! How often we relegate to the background the truly beloved ones, the ones who are always an invisible presence in our lives – steadying us, keeping us on the right path...without whom, we would be nothing!

Perhaps philosophy was not meant to be a take-away from this science program – but it made me more humble, more aware and more thankful for people in my life!

Those of you who are interested - this is the video of the first landing on the moon - http://www.youtube.com/watch?v=RMINSD7MmT4